From Wikipedia, the free encyclopedia
Jump to navigation Jump to search
Deity or spirit who is a guardian, patron or protector of a particular place
"City god" redirects here. For Chinese patron deities of cities, see City God (China).

A tutelary (/ˈtutlˌɛri/ or /ˈtjutlˌɛri/) (also tutelar) is a deity or spirit who is a guardian, patron, or protector of a particular place, geographic feature, person, lineage, nation, culture, or occupation. The etymology of "tutelary" expresses the concept of safety, and thus of guardianship.

In late Greek and Roman religion, one type of tutelary deity, the genius, functions as the personal deity or daimon of an individual from birth to death. Another form of personal tutelary spirit is the familiar spirit of European folklore.[1] 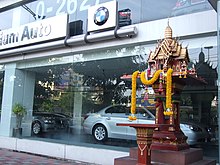 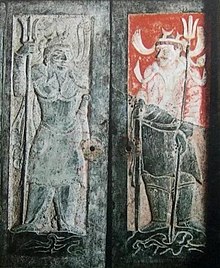 Stone doors of a tomb of the period of the Northern Dynasties to Tʻang Dynasty, excavated in Ching-pien County of the city of Yü-lin, Shensi Province. It shows two figures with tridents as the guardian deities of the tomb.

Socrates spoke of hearing the voice of his personal spirit or daimonion:

You have often heard me speak of an oracle or sign which comes to me … . This sign I have had ever since I was a child. The sign is a voice which comes to me and always forbids me to do something which I am going to do, but never commands me to do anything, and this is what stands in the way of my being a politician.[2]

The Greeks also thought deities guarded specific places: For instance, Athena was the patron goddess of the city of Athens. 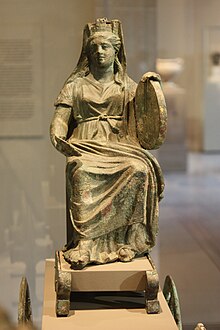 Tutelary deities who guard and preserve a place or a person are fundamental to ancient Roman religion. The tutelary deity of a man was his Genius, that of a woman her Juno.[3] In the Imperial era, the Genius of the Emperor was a focus of Imperial cult. An emperor might also adopt a major deity as his personal patron or tutelary,[4] as Augustus did Apollo.[5][6] Precedents for claiming the personal protection of a deity were established in the Republican era, when for instance the Roman dictator Sulla advertised the goddess Victory as his tutelary by holding public games (ludi) in her honor.[7]

Each town or city had one or more tutelary deities, whose protection was considered particularly vital in time of war and siege. Rome itself was protected by a goddess whose name was to be kept ritually secret on pain of death (for a supposed case, see Quintus Valerius Soranus).[8][9] The Capitoline Triad of Juno, Jupiter, and Minerva were also tutelaries of Rome.[10]

The Italic towns had their own tutelary deities. Juno often had this function, as at the Latin town of Lanuvium and the Etruscan city of Veii,[11] and was often housed in an especially grand temple on the arx (citadel) or other prominent or central location.[12] The tutelary deity of Praeneste was Fortuna, whose oracle was renowned.[13]

The Roman ritual of evocatio was premised on the belief that a town could be made vulnerable to military defeat if the power of its tutelary deity were diverted outside the city, perhaps by the offer of superior cult at Rome.[14][15] The depiction of some goddesses such as the Magna Mater (Great Mother, or Cybele) as "tower-crowned" represents their capacity to preserve the city.[16]

A town in the provinces might adopt a deity from within the Roman religious sphere to serve as its guardian, or syncretize its own tutelary with such; for instance, a community within the civitas of the Remi in Gaul adopted Apollo as its tutelary, and at the capital of the Remi (present-day Rheims), the tutelary was Mars Camulus,[17]

Lararium depicting tutelary deities of the house: the ancestral Genius (center) flanked by two Lares, with a guardian serpent below

Tutelary deities were also attached to sites of a much smaller scale, such as storerooms, crossroads, and granaries. Each Roman home had a set of protective deities: the Lar or Lares of the household or familia, whose shrine was a lararium; the Penates who guarded the storeroom (penus) of the innermost part of the house; Vesta, whose sacred site in each house was the hearth; and the Genius of the paterfamilias, the head of household.[18] The poet Martial lists the tutelary deities who watch over various aspects of his farm.[19] The architecture of a granary (horreum) featured niches for images of the tutelary deities, who might include the genius loci or guardian spirit of the site, Hercules, Silvanus, Fortuna Conservatrix ("Fortuna the Preserver") and in the Greek East Aphrodite and Agathe Tyche.[20]

The Lares Compitales were the tutelary gods of a neighborhood (vicus), each of which had a compitum (shrine) devoted to these.[21][22] During the Republic, the cult of local or neighborhood tutelaries sometimes became rallying points for political and social unrest.

Some tutelary deities are known to exist in Slavic Europe, a more prominent example being that of Leshy.[23]