From Wikipedia, the free encyclopedia
(Redirected from Targum of Onkelos)
Jump to navigation Jump to search
Aramaic translation of the Five Books of Moses 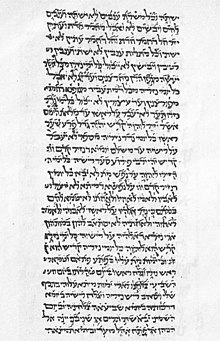 Interlinear text of Hebrew Numbers 6.3–10 with Aramaic Targum Onkelos from the British Library. 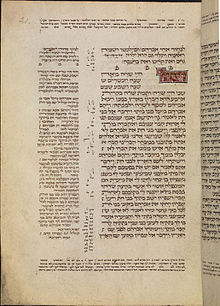 Targum Onkelos (or Onqelos), תרגום אונקלוס, is the Jewish Aramaic targum ("translation") of the Torah, accepted as an authoritative translated text of the Five Books of Moses and thought to have been written in the early 2nd-century CE.

Its authorship is traditionally attributed to Onkelos, a famous convert to Judaism in Tannaic times (c. 35–120 CE).[1][2] According to a story in the Talmud, the content of Targum Onkelos was originally conveyed by God to Moses at Mount Sinai. However, it was later forgotten by the masses, and rerecorded by Onkelos.[3]

While the Aramaic translation of the Torah is traditionally attributed to "Onkelos", and the translation of the Torah to Greek was performed by Aquila of Sinope, most scholars hold these to be one and the same person.[4] According to Epiphanius, the Greek translation was made by Aquilas before he converted to Judaism, while the Aramaic translation was made after his conversion.[5] This is said to have been under the direct guidance and instruction of Rabbi Yehoshua and Rabbi Eliezer.[6] Indeed, the same biographical stories that the Jerusalem Talmud attributes to Aquila, the Babylonian Talmud attributes to Onkelos.[7][8] The overwhelming similarities between the biographies of Aquila and Onkelos has led many to conclude they are the same person. Zvi Hirsch Chajes identified the Aramaic "Targum Onkelos" as Aquila's Greek translation, translated once again into Aramaic. Likewise, A.E. Silverstone (1931:73) has shown quite consummately that Aquilas wrote both the Greek and the Aramaic versions, insofar that "both versions betray the same outstanding characteristics."

A modern scholar has argued that the Aramaic translation must date to the late 4th-early 5th centuries, due to reusing language from other midrashim composed at that time, and thus could not have been composed by Aquila/Onkelos (who lived in the 2nd century).[7] Others, dissenting, have concluded that Onkelos' Aramaic translation originated in Palestine in the 1st or early 2nd centuries CE, but that its final redaction was done in Babylonia probably in the 4th or 5th century CE.[9] Onkelos' revised translation became the official version used in translating the Torah on each Sabbath day, displacing the earlier Palestinian Aramaic traditions which had been widely used. The Babylonian Talmud refers to the Torah's Aramaic translation (Targum Onkelos) as "targum didan" ("our translation"), as opposed to that of the more ancient Palestinian Targum.[10]

In Talmudic times, readings from the Torah within the synagogues were rendered, verse-by-verse, into an Aramaic translation. To this day, the oldest surviving custom with respect to the Yemenite Jewish prayer-rite is the reading of the Torah and the Haftara with the Aramaic translation (in this case, Targum Onkelos for the Torah and Targum Jonathan ben 'Uzziel for the Haftarah).[11][12] The custom to read the Aramaic Targum each Sabbath day in the synagogue during the weekly Torah lection was eventually abandoned by other communities in Israel, owing largely to the author of the Shulhan Arukh (Orach Chaim §145:3) who did not encourage its practice, saying that they do not understand the meaning of its words.

The reading of the Targum, verse by verse, in conjunction with the Torah that is read aloud on the Sabbath day is not to be confused with a different practice, namely, that of reviewing the entire Parashah before the commencement of the Sabbath, and which practice has its source in the Talmud, and which the codifiers of Jewish law have ruled as Halacha:[18] "A person should complete his portions of scripture along with the community, reading the scripture twice and the targum once (Shnayim mikra ve-echad targum)."[19] Here, the reference is to completing the reading of the Parashah at home or in the Beit Midrash, along with others, reading in tandem, during which reading each verse is repeated twice; once by the reader himself, followed by a repetition of the same verse by the entire group, and lastly by the initial reader himself who cites the Aramaic Targum of Onkelos.[20]

Onkelos' Aramaic translation of the Pentateuch (Five Books of Moses) is almost entirely a word-by-word, literal translation of the Hebrew Masoretic Text, with very little supplemental material in the form of aggadic paraphrase.[21] However, where there are found difficult biblical passages, Onkelos seeks to minimize ambiguities and obscurities. He sometimes employs non-literal aggadic interpretations or expansions in his translated text, usually in those places where the original Hebrew is marked either by a Hebrew idiom, a homonym, or a metaphor, and could not be readily understood otherwise.

The translator is unique in that he avoids any type of personification, or corporeality, with God, often replacing "human-like" characteristics representing God in the original Hebrew with words that convey a more remote and impersonal sense. For example, "my face" (Heb. panai) is replaced by "from before me" (Exodus 33:23),[22] while "beneath his feet" is replaced by "under his throne of glory" (Exodus 24:10), and "The Lord came down upon Mount Sinai" by "The Lord manifested himself upon Mount Sinai" (Exodus 19:20).[23] Samuel David Luzzatto suggests that the translation was originally meant for the "simple people". This view was strongly rebutted by Nathan Marcus Adler in his introduction to his commentary to Targum Onkelos Netinah La-Ger. He often updates the names of biblical nations, coinage and historical sites to the names known in his own post-biblical era.

In matters of Halakha, the targum entirely agrees with Rabbi Akiva's opinions. Some authors suggest that Akiva provided for a revised text of the essential base of Targum Onkelos.[24]

Some of the more notable changes made by Onkelos, in which he attempts to convey the underlying meaning of a verse, rather than its literal translation, are as follows: