Simpsons Roasting on an Open Fire

From Wikipedia, the free encyclopedia
Jump to navigation Jump to search
1st episode of the first season of The Simpsons

"Simpsons Roasting on an Open Fire", titled onscreen as "The Simpsons Christmas Special",[1][3] is the first syndicated episode of the American animated TV series The Simpsons and TV spectacular, originally airing on December 17, 1989.

In the episode, Bart gets a tattoo and Marge spends all the family's holiday budget having it removed. When Homer learns his mean boss is not giving employees Christmas bonuses, he takes a job as a shopping mall Santa, but fails to earn enough money for presents. After losing all his Santa earnings at a dog-racing track on Christmas Eve, Homer lets Bart keep Santa's Little Helper when the dog finishes last and is abandoned by its owner.

The episode was written by Mimi Pond and directed by David Silverman. "Simpsons Roasting on an Open Fire" was nominated for two Emmy Awards in 1990, and has received positive reviews from television critics. It was viewed by approximately 13.4 million viewers in its original airing.

The Simpsons was originally intended to debut earlier in 1989 with "Some Enchanted Evening", but due to animation problems with that episode, the show debuted with this episode on December 17.

After attending the Springfield Elementary School Christmas pageant, the Simpsons prepare for the holiday season. Bart and Lisa write letters to Santa; Lisa asks for a pony and Bart wants a tattoo. Marge and Homer are furious and forbid Bart from getting a tattoo. The next day, Marge takes the kids Christmas shopping at the mall. Bart sneaks away to get a tattoo that reads Mother on his arm, thinking Marge will like it. Before the artist can finish the tattoo, Marge finds Bart and drags him to the dermatologist to have it removed. She spends the family's entire holiday budget on the procedure thinking that Homer's Christmas bonus will cover gift expenses.

At the power plant, Homer's mean-spirited boss, Mr. Burns, announces that employees will receive no Christmas bonuses this year. When he learns Marge spent the family's holiday money on tattoo removal, Homer secretly moonlights as a shopping mall Santa at the suggestion of his friend Barney Gumble. While at the mall on Christmas Eve, Bart removes Santa's beard, exposing Homer's secret. Bart apologizes for the prank and praises his father for moonlighting to give the family Christmas presents. After Homer's Santa gig pays far less than expected due to high tax deductions, he and Bart receive a greyhound racing tip from Barney.

At Springfield Downs, Homer bets all his money on a last-minute entry named Santa's Little Helper, a 99–1 long shot. The greyhound finishes last. As Homer and Bart leave the track, they see the dog's owner berate and abandon him for losing the race. Bart pleads with Homer to keep the dog as a pet; they return home and Bart introduces Santa's Little Helper as their family dog. The family is overjoyed by Homer's gesture and celebrates by singing "Rudolph the Red-Nosed Reindeer". 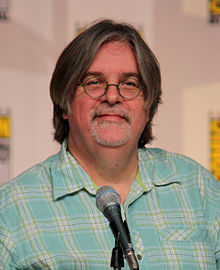 The Simpsons creator Matt Groening conceived of the idea for the Simpsons in the lobby of James L. Brooks's office. Brooks, the producer of the sketch comedy program The Tracey Ullman Show, wanted to use a series of animated shorts as bumpers between sketches. He had asked Groening to pitch an idea for a series of animated shorts, which Groening initially intended to present as his Life in Hell series. However, when Groening realized that animating Life in Hell would require the rescinding of publication rights for his life's work, he chose another approach and formulated his version of a dysfunctional family.[4]

The Simpson family first appeared as shorts in The Tracey Ullman Show on April 19, 1987.[5] Groening submitted only basic sketches to the animators and assumed that the figures would be cleaned up in production. However, the animators merely re-traced his drawings, which led to the crude appearance of the characters in the initial short episodes.[6] In 1989, a team of production companies adapted The Simpsons into a half-hour series for the Fox Broadcasting Company. Brooks negotiated a provision in the contract with the Fox network that prevented Fox from interfering with the show's content.[7] Groening said his goal in creating the show was to offer the audience an alternative to what he called "the mainstream trash" they were watching.[8] The half-hour series premiered on December 17, 1989, with "Simpsons Roasting on an Open Fire".[2]

"Simpsons Roasting on an Open Fire" is the first episode of The Simpsons and the Fox network was nervous about the show because they were unsure if it could sustain the audience's attention for the duration of the episode.[9] They proposed doing three seven-minute shorts per episode and four specials until the audience adjusted,[9] but in the end, the producers gambled by asking Fox for 13 full-length episodes.[10] The series was originally planned to premiere earlier in the fall of 1989 with the episode "Some Enchanted Evening", but due to major problems with the animation of that episode, the series began on December 17 with this episode. "Some Enchanted Evening" instead aired as the season finale.[11] The episode, being the first to air, lacked the opening sequence which was later added in the second episode, "Bart the Genius", when Groening realized that a longer opening sequence resulted in less animation.[9] Because "Simpsons Roasting on an Open Fire" was the eighth episode produced, but the first one aired, it has more refined animation than the episodes following it, such as "Bart the Genius" and "Homer's Odyssey". Additionally, the characters' personalities are more developed.[9]

The "Santas of many lands" portion of the Christmas pageant is based on Groening's experience in the second grade when he did a report on Christmas in Russia. Groening also used that reference in his comic strip "Life in Hell" when he spoofed himself as a young man, being told that it is too bad his grandmother is from Russia, because Christmas was against the law there. Also, Groening claims that this episode has been incorrectly credited with creating the "alternate version" of "Jingle Bells" that has become a well-known children's playground song.[9] During Lisa's performance at the Christmas pageant, she appears to be naked from the waist down. According to David Silverman, this was an animation error and she was intended to be wearing a body stocking, but the Korean animators never colored it in.[12]

Mimi Pond wrote the episode, the only one she wrote for the series,[13] while staff writer Al Jean came up with the title,[14] which alludes to "The Christmas Song", also known as "Chestnuts Roasting on an Open Fire."[1] David Silverman directed this episode, while Rich Moore storyboarded it and designed Ned Flanders. Several of the scenes were laid out by Eric Stefani, brother of Gwen Stefani.[12] In this episode, Barney had blonde hair which was the same color as his skin, but that was later dropped because of the belief that only the Simpson family should have such hair.[9] Seymour Skinner, Milhouse Van Houten, Sherri and Terri, Moe Szyslak, Mr. Burns, Barney Gumble, Patty and Selma, Ned and Todd Flanders, Santa's Little Helper, Snowball II, Dewey Largo, and Lewis all make their first appearances in this episode.[1] Snowball I is mentioned for the first time and Waylon Smithers can be heard over the speaker at the power plant, but he is not seen.[1]

In its original American broadcast, "Simpsons Roasting on an Open Fire" finished thirtieth place in the weekly ratings for the week of December 11–17, 1989 with a Nielsen rating of 14.5 and was viewed in approximately 13.4 million homes. It was the second highest rated show on the Fox network up to that point.[15]

Since airing, the episode has received mostly positive reviews from television critics.

IGN's Robert Canning in a 2008 review of the episode noted, "though not the funniest of episodes, it certainly was groundbreaking. [...] With this episode, The Simpsons had its premise down, and it certainly had its edge."[16]

Warren Martyn and Adrian Wood, the authors of the book I Can't Believe It's a Bigger and Better Updated Unofficial Simpsons Guide, said of the episode: "pretty standard early fare, with the series not quite hitting its stride." They went on to say, "the realism of the first season is much apparent, with only the laser used to remove Bart's tattoo hinting at what the series will become."[1]

In a DVD review of the first season, David B. Grelck gave the episode a rating of 3½/5 and commented: "Surprisingly, this early episode has a lot of the zest of the later shows, despite fairly odd looking art and a very Walter Matthau voice for Homer, still has some laughs."[17]

Colin Jacobson at DVD Movie Guide said in a review that the episode "is good but not great early Simpsons" and further commented: "For many years I thought of 'Roasting' as a terrible episode, but it's not. While I don't feel it's anything special, it remains a fairly entertaining show that has a few entertaining moments."[18]

In 2009, the website IGN named the episode number 4 on its "Top 10 Holiday Specials" list, writing "With the off-beat sense of humor that we have learned to love from The Simpsons and a story showing the value of family on the Christmas holiday, we can't help but watch this great special every year."[20]

In 2014, it was selected by current showrunner, Al Jean, as one of five essential episodes in the show's history.[21] In 2020, Jean acknowledged "Simpsons Roasting on an Open Fire" as an episode many consider to be a favorite.[22]

Listen to this article (info/dl)

This audio file was created from a revision of the article "Simpsons Roasting on an Open Fire" dated 2009-01-14, and does not reflect subsequent edits to the article. (Audio help)
More spoken articles
Retrieved from "https://en.wikipedia.org/w/index.php?title=Simpsons_Roasting_on_an_Open_Fire&oldid=962601990"
Categories:
Hidden categories: