From Wikipedia, the free encyclopedia
Jump to navigation Jump to search
For the geometer moth genus, see Plataea (moth). 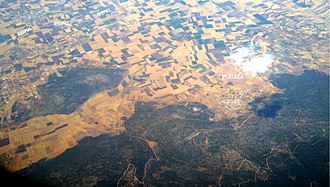 View of Platea, and the battlefield of the Battle of Plataea.
Plataies and Plataea

Modern Plataies and ruins of the city of Plataea.

Topographical map of the ruins of Plataea. 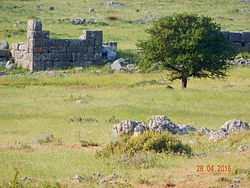 Part of the wall of Plataeae

Plataea or Plataia (/pləˈtiːə/; Ancient Greek: Πλάταια), also Plataeae or Plataiai (/pləˈtiːiː/; Ancient Greek: Πλαταιαί), was an ancient city, located in Greece in southeastern Boeotia, south of Thebes.[1] It was the location of the Battle of Plataea in 479 BC, in which an alliance of Greek city-states defeated the Persians.

Plataea was destroyed in the Peloponnesian War by Thebes and Sparta in 427 BC, and rebuilt in 386. The modern Greek town of Plataies is built near its ruins.

Alliance with Athens and presence at Marathon[edit] 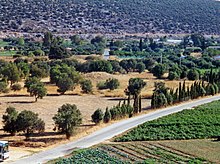 The burial mound of the Plataeans, fallen at the Battle of Marathon, Marathon

Herodotus tells that, in order to avoid coming under Theban hegemony, Plataea offered to "put themselves into Spartan hands". However, the Spartans refused this offer and, wishing to cause mischief between the Boeotians and Athens, recommended that the Plataeans ally themselves with Athens instead. This advice was accepted and a delegation sent to Athens, where the Athenians were agreeable to such a proposal. On learning that Athens had accepted the alliance, the Thebans sent an army against Plataea, but were met by an Athenian one. Corinth attempted to mediate the dispute, and achieved an agreement that set the border between Thebes and Plataea. In addition, Thebes made a commitment not to interfere with cities that did not want to be a part of a Boeotian state. However, after the Corinthians had left and Athenians were starting their journey home, they were set upon by the Boeotians. In the subsequent battle, the Athenians prevailed and set the river Asopus as the border between Thebes and Plataea.

With Athens as their ally, the Plataeans were able to avoid subjugation by their neighbours and maintain their freedom. In honour of this debt, at the Battle of Marathon, Plataea alone would fight at the Athenians' side. Herodotus describes how, on the eve of battle and faced with the formidable Persian expeditionary force, the Athenians had despaired of the Spartans, or indeed anyone else, coming to their aid in what seemed to be impossible odds. Sentinels spied dust clouds in the north and initially feared that another Persian army, or a Persian ally, was on the way to the battlefield. Instead it was the Plataeans coming "panstratiá", i.e., having sent "every available fighting man" (this is thought to have amounted to about 1,000) in Athens' hour of greatest need. They were led by their general, Arimnestos. In acknowledgement and gratitude of their ally's fidelity, the Athenians gave the Plataeans the honour of the left flank during the battle (the left being the safer of the two flanks). After the battle, the Plataeans were allowed to share Athenian memorials and in the (normally exclusively Athenian) religious rites, sacrifices and games asking for the blessing of Athens' patron gods.

In 479 BC Plataea was the site of the final battle that repelled the second Persian invasion of Greece. According to Herodotus, the Spartan general Pausanias led an allied Greek defense against Mardonius' Persian forces. Although they were vastly outnumbered, the Greeks were able to kill Mardonius; his death precipitated the Persian rout that followed. Accounts vary, but there is general agreement that the battle resulted in a significant number of Persian dead, with many more put to flight. This battle would mark the last time a Persian army invaded mainland Greece. The Greek victory at Plataea is commemorated by the Serpent Column erected at Delphi and now displayed in Istanbul.

During the first year of the Peloponnesian War, the Thebans attempted to capture the city by surprise, but failed. In 429 BC, the Spartan king Archidamus II himself led a siege of the city, which was finally forced to surrender in the next year. Plataea was razed to the ground by the Thebans.

Thebes occupied the site of Plataea until 387 BC. Athens harbored the city's survivors. The Thebans were on the losing side in the Corinthian War and the 387 Peace of Antalcidas required Thebes disband its Boeotian League. This made possible the rebuilding of Plataea in 386. However, with the resurgence of Thebes and the creation of the Theban hegemony by Epaminondas, the Thebans destroyed Plataea again in 373.

In 338 BC, after Philip II of Macedon defeated the Thebans at the Battle of Chaeronea, he reestablished Plataea as "a symbol of Greek courage in resisting the Persians". His son, Alexander the Great in 335 altogether destroyed Thebes, whereupon its territory was divided among the cities of Boeotia – evidently, the rebuilt Plataea shared in this territorial division.