Phosphorus (Greek Φωσφόρος Phōsphoros) is the Morning Star, the planet Venus in its morning appearance. Φαοσφόρος (Phaosphoros) and Φαεσφόρος (Phaesphoros) are forms of the same name in some Greek dialects.

This celestial object was named when stars and planets were not always distinguished with modern precision.

Another Greek name for the Morning Star is Heosphorus (Greek Ἑωσφόρος Heōsphoros), meaning "Dawn-Bringer". The form Eosphorus is sometimes met in English, as if from Ἠωσφόρος (Ēōsphoros), which is not actually found in Greek literature,[1] but would be the form that Ἑωσφόρος would have in some dialects. As an adjective, the Greek word φωσφόρος is applied in the sense of "light-bringing" to, for instance, the dawn, the god Dionysos, pine torches, the day; and in the sense of "torch-bearing" as an epithet of several god and goddesses, especially Hecate but also of Artemis/Diana and Hephaestus.[2]

The Latin word lucifer, corresponding to Greek φωσφόρος, was used as a name for the morning star and thus appeared in the Vulgate translation of the Hebrew word הֵילֵל (helel), meaning Venus as the brilliant, bright or shining one, in Isaiah 14(Isaiah 14:12), where the Septuagint Greek version uses, not φωσφόρος, but ἑωσφόρος. As a translation of the same Hebrew word the King James Version gave "Lucifer", a name often misunderstood as a reference to Satan. Modern translations of the same passage render the Hebrew word instead as "morning star", "daystar", "shining one" or "shining star". In Revelation 22 (Revelation 22:16), Jesus is referred to as the morning star, but not as lucifer in Latin, nor as φωσφόρος in the original Greek text, which instead has ὁ ἀστὴρ ὁ λαμπρὸς ὁ πρωϊνός (ho astēr ho lampros ho prōinos), literally: the star, the shining one, the dawn.[3][4][5] In the Vulgate Latin text of 2 Peter 1 ( 2 Peter 1:19) the word "lucifer" is used of the morning star in the phrase "until the day dawns and the morning star rises in your hearts", the corresponding Greek word being φωσφόρος.

Objectively, Venus is the "light bringer" as she appears most brightly in the sky in December (optical illusion due to days being shorter); the most regular appearance of the planet signalled a beginning of "rebirth" phase where the days would get longer and winter would end.

Alternatively, mythologically, the morning and the evening stars are Venus and Sirius, and the frequent error in mistaking one for the other becomes incorporated in various stories across several cultures.

Known as Sopdet in Egypt, as Sotor, Σωτήρ "Savior" in Ancient Greek astrological texts, and as Seth in Babylonian/Jewish astrology, Sirius "the Eastern Star" and its corresponding partner Venus, known as Ishtar, Ester, Asherah, Astarte, become the Christ and the Anti-Christ.

Sirius "the dog star" is relevant in June and Venus in December, and so Venus in the constellation Virgo ("the Virgin") announces the appearance of Sirius the Savior (on the opposite side of the zodiac circle, ie "gives birth").

The correction of the Egyptian solar calendar by way of helical rising of the Anubis star, Seth, another name for Sirius, also permitted the alignment of the lunar and the solar calendars and predicted the flooding of the Nile thus becoming the Seth or Sotor (Savior) star.

The morning star is an appearance of the planet Venus, an inferior planet, meaning that its orbit lies between that of the Earth and the Sun. Depending on the orbital locations of both Venus and Earth, it can be seen in the eastern morning sky for an hour or so before the Sun rises and dims it, or (as the evening star) in the western evening sky for an hour or so after the Sun sets, when Venus itself then sets. Venus is the brightest object in the sky after the Sun and the Moon, outshining the planets Jupiter and Saturn but, while these rise high in the sky, Venus never does. This may lie behind myths about deities associated with the morning star proudly striving for the highest place among the gods and being cast down.[6] 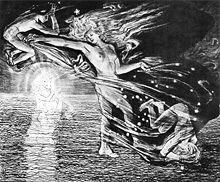 In Greek mythology, Hesiod calls Phosphorus a son of Astraeus and Eos,[7] but other say of Cephalus and Eos, or of Atlas.[8]

While at an early stage the Morning Star (called Phosphorus and other names) and the Evening Star (referred to by names such as Hesperus) were thought of as two celestial objects, the Greeks accepted that the two were the same, but they seem to have continued to treat the two mythological entities as distinct. Halbertal and Margalit interpret this as indicating that they did not identify the star with the god or gods of mythology "embodied" in the star.[12]

In the philosophy of language, "Hesperus is Phosphorus" is a famous sentence in relation to the semantics of proper names. Gottlob Frege used the terms "the evening star" (der Abendstern) and "the morning star" (der Morgenstern) to illustrate his distinction between sense and reference, and subsequent philosophers changed the example to "Hesperus is Phosphorus" so that it utilized proper names. Saul Kripke used the sentence to posit that the knowledge of something necessary — in this case the identity of Hesperus and Phosphorus — could be discoverable rather than known a priori.

The Latin word corresponding to Greek "Phosphorus" is "Lucifer". It is used in its astronomical sense both in prose[13] and poetry.[14] Poets sometimes personify the star, placing it in a mythological context.[15]