From Wikipedia, the free encyclopedia
(Redirected from List of cities in Palestinian Authority areas)
Jump to navigation Jump to search 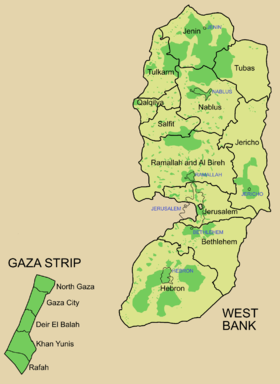 Map of Area A, Palestinian localities in Area B and Palestinian neighborhoods in East Jerusalem (who are under full Israel control).

The following is a list of cities administered by the Palestinian National Authority. After the 1995 Interim Agreements, the Palestinian National Authority (PNA) took control of civil affairs in both designated Areas, A and B, where most Palestinian population centers are located (except those within the municipal borders of East Jerusalem). Israel Defense Forces are responsible for security in Area B in the West Bank and have full control over localities in Area C.

Following the 2007 rift between the main two Palestinian factions Fatah and Hamas, the PNA has been split with the former dominating the Palestinian government in the West Bank and the latter controlling the Gaza Strip.

The Local Government Ministry of the Palestinian National Authority is responsible for granting a town with city or municipality status. However, there is no specific guidelines for a particular locality to achieve the status of Palestinian city. It is mostly judged on the population reaching above 20,000. The Palestinian Central Bureau of Statistics (PCBS) took its latest official census in 2007.[1]

The largest city in the Gaza Strip and all of Palestine is Gaza City and the largest Palestinian city in the West Bank is Hebron. Some cities form agglomerations with other towns or cities, such as the Bethlehem metropolitan area with Beit Jala and Beit Sahour. Ramallah and al-Bireh also form an agglomeration and are often considered a single city.

The following is a list of all Palestinian cities under Ramallah-administration, their governorates, their specific jurisdictions and their populations according to the 2007 census and the 2015 estimate by the PCBS. 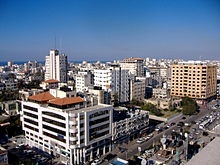 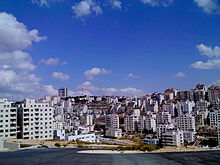