From Wikipedia, the free encyclopedia
Jump to navigation Jump to search
This article is about the Austroasiatic ethnic group of India. For the Tibeto-Burman people also known as Ho of China, Vietnam and Laos, see Hani people.
Ethnic group of India, Nepal and Bangladesh

The Ho people are an Austroasiatic speaking ethnic group of India. They are mostly concentrated in the state of Jharkhand where they constitute around 10.7% of the total Scheduled Tribe population as of 2011.[2] With a population of approximately 700,000 in the state in 2001, the Ho were the fourth most numerous Scheduled tribe in Jharkhand after the Santals, Kurukhs, and Mundas.[3] Ho also inhabit adjacent areas in the neighboring states of Odisha, West Bengal and Bihar bringing the total to 806,921 as of 2001.[2][4][5] They also live in Bangladesh and Nepal[6]

The ethnonym "Ho" is derived from the Ho language word hō meaning "human". The name is also applied to their language which is an Austroasiatic language closely related to Mundari. According to Ethnologue, the total number of people speaking the Ho language was 1,040,000 as of 2001.[7] Similar to other Austroasiatic groups in the area, the Ho report varying degrees of multilingualism, also using Hindi and English.[8]

Over 90% of the Ho practice the indigenous religion Sarnaism. The majority of the Ho are involved in agriculture, either as land owners or laborers, while others are engaged in mining. Compared to the rest of India, the Ho have a low literacy rate and a low rate of school enrollment. The government of Jharkhand has recently approved measures to help increase enrollment and literacy among children.[9][10][11]

According to historian Ram Sharan Sharma in his book India's Ancient Past mentioned that, many Austroasiatic, Dravidian, and non-Sanskrit terms occur in the Vedic texts ascribed to 1500-500 BC.[14] They indicate ideas, institutions, products, and settlements associated with peninsular and non-Vedic India. The people of this area spoke the proto-Munda language. Several terms in the Indo-Aryan languages that signify the use of cotton, navigation, digging, stick, etc. have been traced to the Munda languages by linguists. There are many Munda pockets in Chota Nagpur Plateau, in which the remnants of Munda culture are strong. It is held that changes in the phonetics and vocabulary of the Vedic language can be explained as much on the basis of the Dravidian influence as that of the Munda.[14]

Starting from the period between the 9th and 12th centuries, copper was smelted in many parts of old Singhbhum district. It is believed that many immigrants entered Singhbhum from Manbhum in the 14th century or earlier. When the Hos entered old Singhbhum, they overcame the Bhuiyas, who were then inhabitants of the forest country. In the latter half of the eighteenth century, the Hos fought several wars against the Rajas of the Chota Nagpur States and Mayurbhanj to retain their independence. As far as is known, the Muslims left them alone.[15] Although the area was formally claimed to be a part of the Mughal Empire, neither the Mughals nor the Marathas, who were active in the surrounding areas during the decline of the Mughals, ventured into the area.[16]

In 1765, Chota Nagpur was ceded to the British East India Company as part of Bengal, Bihar, and Orissa Provinces. The Raja of Singhbhum asked the British Resident at Midnapore for protection in 1767, but it was not until 1820 that he acknowledged himself as a feudatory of the British. The restless Hos broke the agreement soon and took part in a fierce rebellion of 1831–33, called the Kol uprising, along with the Mundas.[16][17] The immediate cause of the Kol uprising was the oppression of Adivsis by non-Adivasi thikadars (literally meaning contractors) or farmers of rent. The Hos and Mundas were joined by the Kurukh and the houses of many dikku (non-Adivasis or outsiders) landlords were burnt and a number of people were killed.[15] It compelled the British to recognise the need for a thorough subjugation of the Hos.[16] The uprising was suppressed with a good deal of trouble by several hundred British troops.[15] While local troops quelled the uprising, another group under Colonel Richards entered Singhbhum in November 1836. Within three months all the ringleaders surrendered. In 1857, the Raja of Porahat rose in rebellion and a sizeable section of the Hos joined in the revolt. Troops were sent who put an end to the disturbances by 1859.[16]

Ho people speak the Ho language, an Austroasiatic language closely related to Mundari and more distantly related to languages of Southeast Asia such as Khmer and Mon. The Austroasiatic languages of India, including Ho, are inflected fusional languages unlike their distant relatives in Southeast Asia which are analytic languages. This difference in typology is due to extensive language contact with the unrelated Indo-Aryan and Dravidian languages. The phonology of Ho has also been influenced by the nearby unrelated languages.[12] There are at least three dialects of Ho: Lohara, Chaibasa and Thakurmunda. All dialects are mutually intelligible with approximately 92% of all Ho speakers able to understand a narrative discourse in both Chaibasa and Thakurmunda dialects.[7] The most divergent dialects are in the extreme south and east of Ho territory.

While fewer than five percent of Ho speakers are literate in the language, Ho is typically written in Devanagari, Latin, scripts. A native alphabet, called Warang Citi and invented by Lako Bodra in the 20th century, also exists.[7][18]

Ho village life revolves around five main parab or festivals. The most important festival, Mage Parab, takes place in the late winter month of Magha and marks the completion of the agricultural cycle.[19] It is a week-long celebration held to honor Singbonga, the creator god. Other lesser bonga ("deities") are also honored throughout the week. Baa Parab, the Festival of Flowers held in mid-spring, celebrates the yearly blossoming of the sacred Sal trees. Sohrai or Gaumara is the most important agricultural festival, the date of which usually coincides with the nationwide festivities in the fall. It is a village wide celebration with music and dancing held in honor of the cattle used in cultivation. During the ceremonies, the cows are painted with a flour and dye mix, anointed with oil and prayed over after a black chicken is sacrificed to an image of the cattle bonga. Baba Hermutu is the ceremonial first sowing. The date is set each year in the early spring by the deurior priest pahan who also officiates the three-day ceremony by praying and commencing his first sowing of the year. Jomnama Parab is held in late fall before the first harvest is eaten to thank the spirits for a trouble-free harvest.[19][20][21]

Dance is important to Adivasi culture in general and for the Ho, it is more than simply a means of entertainment. Their songs are generally accompanied by dances which change with the seasons. Songs and distinctively choreographed dance are integral parts of Ho culture and art,[15][22] as well as important parts of their traditional festivals, especially Mage Parab. Most villages have a dedicated dancing ground, called akhra, usually consisting of a cleared space of hard ground under a spreading tree. Dances are organised on a staggered basis in the villages so that other villagers can participate. Traditional Ho music incorporates native instruments including a dama (drum), dholak, dumeng (mandar), and the rutu (flute).[15]

The Ho people brew a y of rice-beer commonly known as diyeng .

In the 2001 national census, 91% of the Hos declared that they professed "other religions and persuations", meaning that they do not consider themselves to belong to any of the major religious groups and follow their indigenous religious systems called "Sarna" or Sarnaism.[3] Also known as sarna dhorom ("religion of the holy woods"), this religion plays an important part in the life of adivasi.[23] Their beliefs in gods, goddesses and spirits are ingrained in them from childhood. The religion of the Hos resembles, to a great extent that of Santhals, Oraons, Mundas, and other tribal people in the region. All religious rituals are performed by a village priest known as a deuri. However, he is not required to propitiate malevolent spirits or deities. The spirit doctor deowa takes care of this.[16]

Houlton writes, "I do not want to give the impression, by mentioning occasional divergences from the straight and narrow path, that aboriginals are immoral. On the contrary, their standards of post-marital morality and fidelity are probably a good deal higher than in some races that claim to be more civilised. The status of women is high. Wives are partners and companions to their husbands. It is even whispered that hen-pecked husbands are not uncommon among the tribesmen."[15]

There is a system of payment of bride-price amongst the Hos. The bride-price is often a status symbol and in modern times it remains not more than 101-1001 rupees. As a result, many Ho girls remain unmarried till advanced age.[15] Among the total Ho population, females outnumber the males.[3]

Almost half the population is engaged in cultivation and another one third also work as land-less agricultural labourers.[3] The Hos, along with Santals, Oraons and Mundas, are comparatively more advanced, and have taken to settled cultivation as their mode of life.[22]

The discovery of iron ore in Ho territory opened the way for the first iron ore mine in India at Pansira Buru in 1901.[24] Over the years iron ore mining spread out in the area. Many Hos are engaged in mining work but that does not add up to any sizeable percentage. However, small, well planned mining towns dotting the territory have brought the Ho people in close touch with the good and bad aspects of urbanization. Some of the prominent mining towns in the area are Chiria, Gua, Noamundi and Kiriburu. 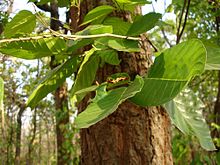 Sal (Shorea robusta) is the most important tree in the area and it seems to have a preference for the rocky soil there. Although sal is a deciduous tree and sheds its leaves in early summer, the forest undergrowth is generally evergreen, which has such trees as mangoes, jamun, jackfruit, and piar. Other important trees are mahua, kusum, tilai, harin hara (Armossa rohitulea), gular (Fiscus glomerata), asan. The Singhbhum forests are best in the Kolhan area in the south-west of the district.[22] The lives of Ho people have long been intertwined with sal forests and there is a strong resentment against the efforts of timber merchants to replace sal forests with teak plantations.

In order to help increase the literacy rates, the government announced in 2016 that it had designed text books to teach Hindi and mathematics in Ho.[9] In 2017 those textbooks were made available on the central government's e-library platform.[10] In a 2016 effort to help promote tribal languages Tata Steel, a private company, began teaching the Ho language on weekends to dropout schoolgirls at a "camp school" in Naomundi.[26] As of November 2016, 100 girls were enrolled in the camp school. The company has also run private Ho language centres in East Singhbhum, West Singhbhum and Seraikela-Kharsawan districts since 2011. Approximately 6000 people have underwent Ho language and Warang Chiti script training in these centres.[27] In 2017 the government of Jharkhand announced it would soon begin teaching five- and six-year-old primary school students in their local language in order to help reduce the high dropout rate.[11] Among the Hos, 19.7% have completed schooling and 3.1% are graduates.[3] The percentage of school-going children in the age group 5 –14 years was 37.6.[3]