From Wikipedia, the free encyclopedia
Jump to navigation Jump to search
The second person of the Trinity in Christian theology
See also: Son of God (Christianity) 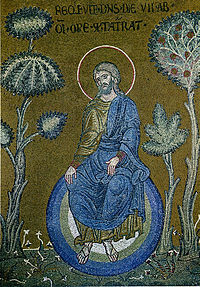 God resting after creation – Christ depicted as the creator of the world, Byzantine mosaic in Monreale, Sicily.

God the Son (Greek: Θεός ὁ υἱός, Latin: Deus Filius) is the second person of the Trinity in Christian theology.[1] The doctrine of the Trinity identifies Jesus as the incarnation of God, united in essence (consubstantial) but distinct in person with regard to God the Father and God the Holy Spirit (the first and third persons of the Trinity).

The term in English follows Latin usage as found in the Athanasian Creed and other texts of the early church: In Greek "God the Son" is ho Theos ho huios (ὁ Θεός ὁ υἱός) as distinct from ho huios nominative tou Theou genitive, ὁ υἱός του Θεού, "Son of God". In Latin "God the Son" is Deus (nominative) Filius (nominative). The term deus filius is found in the Athanasian Creed: "Et tamen non tres omnipotentes, sed unus omnipotens. Ita Deus Pater, Deus Filius, Deus [et] Spiritus Sanctus." (distinct from filius Dei genitive "son of God"), but this phrase is also translated "So the Father is God: the Son is God: and the Holy Ghost is God".[6]

The term is used by Saint Augustine in his On the Trinity, for example in discussion of the Son's obedience to God the Father: deo patri deus filius obediens.[8] and in Sermon 90 on the New Testament "2. For hold this fast as a firm and settled truth, if you would continue Catholics, that God the Father begot God the Son without time, and made Him of a Virgin in time."[9]

The Augsburg Confession (1530) adopted the phrase as Gott der Sohn.[10]

Jacques Forget (1910) in the Catholic Encyclopedia article "Holy Ghost" notes that "Among the apologists, Athenagoras mentions the Holy Ghost along with, and on the same plane as, the Father and the Son. 'Who would not be astonished', says he (A Plea for the Christians 10), 'to hear us called atheists, us who confess God the Father, God the Son and the Holy Ghost, and hold them one in power and distinct in order.' "[11] 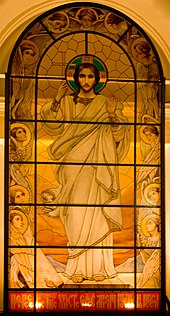 "Son of God" is used to refer to Jesus in Gospel of Mark at the beginning in verse 1:1 and at its end in chapter 15 verse 39. Max Botner wrote, "Indeed, if Mark 1:1 presents the "normative understanding" of Jesus' identity, then it makes a significant difference what the text includes".[12]

The Logos or Word in John 1:1 ("In the beginning was the Word, and the Word was with God, and the Word was God), is often interpreted, especially by Trinitarians, to identify the pre-existent Jesus with this Word.[citation needed]

The disputed Comma Johanneum (1 John 5:7) includes the Son in the formula "For there are three that bear witness in heaven: the Father, the Word, and the Holy Spirit; and these three are one."[13]

Christians believe that Jesus is the only begotten Son of God (John 3:16).[14] Jesus identified himself in New Testament canonical writings. "Jesus said to them, 'Most assuredly, I say to you, before Abraham was, I AM.' " (John 8:58),[15] which some Trinitarians believe is a reference to Moses in his interaction with preincarnate God in the Old Testament.  "And God said to Moses, 'I AM WHO I AM.' And He said, 'Thus you shall say to the children of Israel, "I AM has sent me to you." ' [Exodus 3:14][16]

A manuscript variant in John 1:18 (Θεὸν οὐδεὶς ἑώρακεν πώποτε· μονογενὴς Θεὸς ὁ ὢν εἰς τὸν κόλπον τοῦ Πατρὸς, ἐκεῖνος ἐξηγήσατο) has led to translations including "God the One and Only" (NIV, 1984) referring to the Son.[17]

Later theological use of this expression (compare Latin: Deus Filius) reflects what came to be the standard interpretation of New Testament references, understood to imply Jesus' divinity, but with the distinction of his person from another person of the Trinity called the Father. As such, the title is associated more with the development of the doctrine of the Trinity. Trinitarians believe that a clear reference to the Trinity occurs in Matthew 28:19, "Go, therefore, and make disciples of all nations, baptizing them in the name of the Father, and of the Son, and of the Holy Spirit."

Groups of both trinitarian and antitrinitarian Christians reject the term 'God the Son' to describe Jesus Christ (as well as 'God the Holy Ghost' to describe the Holy Spirit). Jehovah's Witnesses reject the term along with the word 'Trinity' as extrabiblical terminology, along with the Deity of Christ. However, unitarians such as Oneness Pentecostals, who affirm his divinity, object to the term as an unauthorized reversal of the language of Scripture which describes him 40 times as the "Son of God."[18][19] The Church of Christ, which accepts both the Deity of Christ and the trinity doctrine, also avoids the term because they stress the importance to 'Call Bible things by Bible names, and talk about Bible things in Bible ways.'[20]