Duamutef was, in ancient Egyptian religion, one of the Four Sons of Horus[1] and a protection god of the canopic jars.[2] Commonly he is said to be the son of the god Horus the Elder. Another myth describes Duamutef and his brothers as sons of Osiris. According to this account, they were born from a lily flower which arose from the primaeval ocean.

The name Duamutef means "He who adores his mother". In war, the most frequent cause of death was from injuries in the torso and stomach. The deity protecting this organ was associated with death by war and gained the name Duamutef, meaning "adoring his motherland".[citation needed] 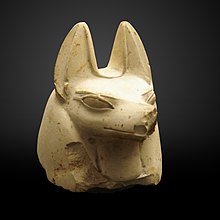 Cover of a canopic jar of the Twenty-sixth Dynasty of Egypt depicting Duamutef, on display at Musée d'Art et d'Histoire in Geneva.

Duamutef usually was depicted on coffins and as the lid of canopic jars. Many images of the Judgement of the Dead show him together with his brothers in front of Osiris on a small lily flower.

As protective god of canopic jars[edit]

Alongside with Horus' three other sons Imsety, Hapi and Qebehsenuef, Duamutef protected the mummified internal organs. His goal was to protect the stomach.[4] His protector is the goddess Neith.[5]