From Wikipedia, the free encyclopedia
Jump to navigation Jump to search
Appearance or non-physical manifestation of Christ 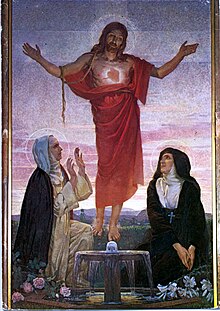 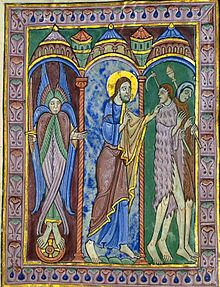 The pre-incarnate Christ expels Adam and Eve from the Garden of Eden; St Albans Psalter

A Christophany is an appearance or non-physical manifestation of Christ. Traditionally the term refers to visions of Christ after his ascension, such as the bright light of the Damascus Christophany.[1]

The etymology is from the Greek Χριστός (Christos) and the Greek ending "phany", coming from the verb φαίνομαι (fénome), which means to appear, to make oneself visible, to be revealed, to come into light.[citation needed] This noun is derived by direct comparison with the term theophany (theo-phaneia).

George Balderston Kidd (1852) popularised the term in relation to the identification of angels in the Old Testament as Christ.[4]

The term was used by Albert Joseph Edmunds (1857–1941) in relation to the revealing of Christ in Christianity and Buddhism.[5]

Since the work of James Borland (1978) usage of the term in conservative Christian publications related to Old Testament appearances of Christ has multiplied exponentially.[6] 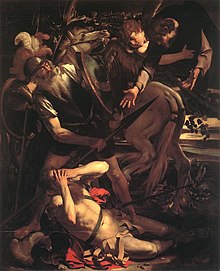 The Conversion of Saint Paul, a 1600 painting by the Italian artist Caravaggio.

A New Testament Christophany is Paul's vision of Christ on the road to Damascus, and the subsequent one of Ananias. Another New Testament example is John's vision of the Son of Man, recounted in Revelation 1:12-18.

Claimed examples of Christophanies in the Hebrew Bible[edit]

Genesis 3:8 was regarded by most Church Fathers and medieval commentators as an appearance by the Logos, or pre-existent Christ,[citation needed] and in art God was always given the features of Jesus until about 1400.[7][need quotation to verify]

A popular Christian understanding of the relationship between Melchizedek and Jesus is that Melchizedek is an Old Testament Christophany.[8] Romanos the Melodist interpreted the figure with whom Abraham spoke in Genesis 18:1–8 as being Christ himself.[9]

J. Douglas MacMillan suggests that angel with whom Jacob wrestles is a "pre-incarnation appearance of Christ in the form of a man."[10]

Some church fathers such as Origen and later theologians such as Martin Luther believed another example is the "Man" who appears to Joshua, and identifies himself as "the commander of the army of the LORD." (Joshua 5:13-15). The standard argument that this was in fact Christ is that he accepted Joshua's prostrate worship, whereas angels refuse such worship [1]; see Revelation 19:9-10. Additionally, he declared the ground to be holy; elsewhere in the Bible, only things or places set aside for God or claimed by him are called holy; see Exodus 3:5. Jewish commentators [2] reading the same text do not accept that this figure was Christ (or even Adonai), but rather the Archangel Michael.[11]

Jonathan Edwards identified an example in Daniel 3:25, when the fourth man in the furnace is described as “… and the form of the fourth is like the Son of God" or "like a son of the gods."[12] The "Suffering servant", from the Book of Isaiah is believed by many Christians to be Jesus.[citation needed] The vision of Isaiah (Isaiah 6) may be regarded as a Christophany. It appears to have been seen as such by John the evangelist, who, following a quote from this chapter, adds 'Isaiah said this because he saw His glory and spoke of Him' (John 12:41)..

Visions of Christ after the New Testament[edit]

A vision is not usually described as a Christophany.[citation needed]