From Wikipedia, the free encyclopedia
Jump to navigation Jump to search
"Frog-mouse war" redirects here. For the 20th-century controversy in the foundations of mathematics, see Brouwer–Hilbert controversy. 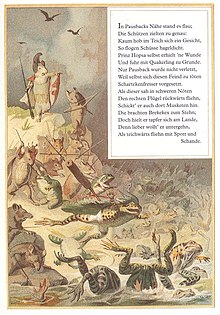 Illustration from an 1878 German edition of the Batrachomyomachia.

The Batrachomyomachia (Ancient Greek: Βατραχομυομαχία, from βάτραχος, "frog", μῦς, "mouse", and μάχη, "battle") or Battle of the Frogs and Mice is a comic epic, or a parody of the Iliad, commonly attributed to Homer, although other authors have been proposed.

On the bank, another Mouse witnesses Psycharpax' death, and informs the other Mice, who arm themselves for battle to avenge the Frog King's treachery, and send a herald to the Frogs with a declaration of war. The Frogs blame their King, who altogether denies the incident. In the meantime, Zeus, seeing the brewing war, proposes that the gods take sides, and specifically that Athena help the Mice. Athena refuses, saying that Mice have done her a lot of mischief. Eventually the gods decide to watch rather than get involved. A battle ensues, and the Mice prevail. Zeus summons a force of crabs to prevent the complete destruction of the Frogs. Powerless against the armoured crabs, the Mice retreat, and the one-day war ends at sundown.[1] 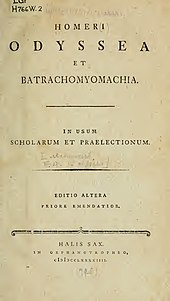 1749 Latin edition of the Odyssey and Batrachomyomachia.

The Romans attributed the Batrachomyomachia to Homer, but according to Plutarch, it is the work of Pigres of Halicarnassus, either the brother or son of Artemisia I, the Queen of Caria, and an ally of Xerxes.[2] Some modern scholars attribute the poem to an anonymous author who would have lived at the time of Alexander the Great,[3] although other authors have been proposed, such as Lucian.[4]

The word batrachomyomachia has come to mean "a trivial altercation". Both the Greek word and its German translation, Froschmäusekrieg, have been used to describe disputes such as the one between the ideologues and pragmatists in the Reagan administration.[5]